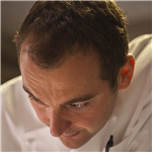 Daniel Humm is head chef of Eleven Madison Park in New York, one of the very few New York restaurants to have a four star review in the New York Times.

Although Eleven Madison Park opened in 1998, it is since Daniel Humm became head chef in 2006 that the restaurant has really captured attention. Daniel is Swiss and after training at Pont le Brent gained a Michelin star at the age of 25 at Gasthaus zum Gupf in the Alps before moving to the US and building a reputation at San Francisco's Compton Place.   Danny Meyer, who also runs the wildly successful New York restaurants Gramercy Tavern and Union Square Cafe, recruited Daniel after being impressed with a meal at Compton Place.

Situated in what was the Met Life corporate headquarters, the dining room is an impressive space, with a vaulting ceiling, marble floor and generously spaced tables, with very well ironed white linen tablecloths. Lovely big windows allow natural light in from Madison Park, or at least it would if it was daylight. In the evening the lighting, as so often in New York these days, is quite dark, sufficiently so that reading the wine list requires some effort, or possibly a torch. The restaurant now has 86 covers, deliberately less than it once had.

As I peered into the gloom a plate of goujeres appeared, a lovely way to start any meal. These were classy, very light, evenly piped and with plenty of cheese flavor (18/20). The menu has been reduced to single words: "pork", "crab" etc, which at least reduces the eye strain needed to read any dish descriptions. The wine list stretches over 127 closely typed pages, with a cellar of 30,000 bottles and no less than 3,500 different wines to choose from. Gresser Meonchberg 2005 was $75 compared to a retail price of $30, and the enjoyable Eitelsbacher Karthauserhof Spatlese 2007 was $80 compared to a US shop price of around $34, but Cuvee Frederich Emile was a chunkier $155 for a wine that can be picked up in a shop for around $48. The glorious 1991 Vega Sicilia Unico was $970 for a wine that can be found for around $406 in a US wine shop, Clos St Hune 2002 was $395 compared to a shop price of around $184 and yet there are some relative bargains here: Mouton Rothschild 1998 was $425 compared to a retail price of around $522, for example. I went with the wine pairing alongside the tasting menu.

An amuse bouche was seaweed lavash (unleavened flatbread), essentially a thin crisp, which was very delicate, and with the taste of seaweed quite restrained. This was served with a cup of Halibut tea (a first for me) in which was placed a little edible red seaweed and thyme; the tea did indeed have a hint of fish flavour, scented with thyme (16/20).

Next was Long Island fluke, sashimi style, on a rice cracker, basil and basil seeds. This was actually very good, the basil seeds giving an interesting flavour note (17/20). Scallop ceviche was flavored with uzu, tangerine and fennel, the uzu and tangerine giving a nice balance to the inherent sweetness of the scallop (17/20). This was paired with Tedorigawa Kinka, a daiginjo sake.

The meal moved up a gear with seared sea urchin from Maine, with panacotta and green apple gelee. This was lovely, the richness of the sea urchin offset by the acidity coming from the green apple, the jelly itself having lovely texture (18/20). This was paired with a St Urbans-Hof Bockstein Spatlese 2009. Next was a rich, indulgent dish of fingerling potato filled with caviar and creme fraiche, and a smoked sturgeon sabayon served to one side in an eggshell. The sabayon was superb, wonderfully rich, while the potato was a welcome earthy complement to the caviar. (18/20) but the sabayon was better than this. The dish was paired with Thalassitis 2009 wine from Santorini.

At this point bread appeared, and I wish it hadn't. A mini baguette, and also an olive and rosemary baguette were served, the bread bought from a bakery called Pain d'Avignon from Long Island; it was deeply ordinary bread, quite jarring given the standard of the dishes it was accompanying (13/20 is kind). Fortunately after I spoke to Daniel Humm there are now plans for them to start making their own bread, which is almost certain to be a big improvement.

The next dish was king crab with apple, avocado, yoghurt and coral, creme fraiche, wrapped in avocado, red ribbon sorrel and edible flowers, with a swirl of Greek yoghurt and lobster coral. The presentation was pretty and the avocado was ripe, but for me the crab flavour was a bit lost, an example where less may be more. Still, this was a very enjoyable dish (17/20). This was paired with a glass of Rudi Pichler Riesling 2006 from Wachau.

Next was a large scallop from Cape Cod, which had been landed just last night. This was seared and served with mussels, clams, and bergamot and lemon puree, veloute of potato and shellfish stock. Despite its size, the scallop was nicely cooked through, with a good veloute. I am not a fan of bergamot as a flavour in general, but it did not distract too much from the high quality scallop (18/20). This was accompanied by the lovely Mas de Daumas Gassac white 2007.

We now moved on to truffles. A black truffle beignet with black truffle remoulade was served in jar of rice, resembling a black truffle, a nice visual touch. The truffle itself was from Provence truffle (17/20). The same truffle was now served as a puree with celeriac, potato and goat cheese, with extra virgin oil infused with truffle. This was a very rich dish, and while the puree was smooth and rich, it was rather unbalanced as a whole, with the celeriac flavour oddly subdued, and badly needing something to offset the richness, perhaps a little green salad on the side (16/20). The wine chosen for this course was a Cave de Tain Hermitage.

Next was a very interesting dish. Carrots from a farm in upstate New York were roasted in duck fat, topped with duck skin, shallots, wheat berries, and dates and flavoured with cumin. The latter was a key component, giving a lovely aroma as the dish arrived. The carrots were genuinely superb, the carrots beautifully cooked and with great flavour, the duck fat adding a layer of gorgeous flavour to the vegetables. A terrific dish (19/20), paired with Albert Seltz Sylvaner 2007.

This was followed by veal with smoked marrow, winter vegetables (carrot, turnip, cabbage), crisp sweetbreads, which were not that crisp but were rich and unctuous, with a veal blanquette (essentially a stew) as sauce. The veal had good flavour and was capably cooked, while for me the sweetbreads were the highlight (17/20). This was accompanied by a Gevrey Chambertin from Philippe Jouan.

This was followed by pork neck, served with "lady apple" with bacon marmalade, red onion with mustard seed and pork jus, and horseradish and mustard. The pork was beautifully cooked, the various mustard elements enhancing the flavour, the apple providing acidic balance. This was a superb dish (19/20). This came with a glass of Mayard Chateauneuf du Pape.

For initial dessert there was jasmine sorbet, with tangerine and cilantro but also some biscuit crumbs (17/20). There was a glass of sparkling Jaillance Cuvee Imperiale to go with this.This was followed by chocolate cremeaux, banana sorbet, caramelised banana with uzu and sesame. The chocolate was high quality (Valrhona 66 per cent), very rich and lovely, with a little salt note provided by a crisp on the side (17/20). Petit fours comprised bergamot savarin, jasmine cream, violet macaroon, chocolate ganache, Mint mousse and mint gelee, peanut tuile and chocolate bonbons (17/20). Coffee was very good.

Service throughout the long evening was superb, my waiter (Shiraz) attentive, efficient and knowledgeable. The bill came to an admittedly chunky $370, with the menu $195 and the wine pairing $145. This was a really enjoyable experience, with good ingredients, classy technique and interesting, inventive dishes. This restaurant is one of the few in New York to receive a four star rating from Frank Bruni of the New York Times, yet bafflingly has just a single Michelin star (editor's note, the restaurant was later upgraded to three stars by Michelin) in a city where Michelin stars seem to be very generously sprinkled. For me this is a very solid two Michelin star restaurant, even by European standards.