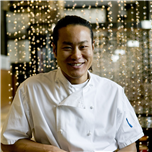 Jun Tanaka is the talented chef at The Ninth, after having been head chef of Pearl in Holborn. He has had a long career in some of the most prestigious kitchens in London, and is a regular on TV these days.

Jun Tanaka had a classical chef training under such luminaries as Marco Pierre White, Philip Howard, Eric Chavot and Nico Ladenis. From 2004 Mr Tanaka was the executive chef of Pearl until the hotel in which it was based was taken over and in 2013 he was left without a restaurant. This, the ninth he has worked at but the first that he has owned, arose after he looked at over a hundred London restaurant sites, which in itself gives you an insight into the frenetic state of the current restaurant market in the capital. In November 2015 The Ninth opened on the site of former Japanese restaurant Nizuni. It is a more casual style of restaurant than Pearl, the room having a wood floor and exposed brickwork that seems de rigeur in London these days. It offers “small plates”, the format beloved of restaurateurs since it encourages diners to spend mre than they intend.

Stracciatella is a cheese from Puglia made with buffalo milk, served here with pickled beetroot and walnuts. The sharpness of the beetroot was a pleasant balance to the cheese, the nuts adding a textural contrast (13/20). I preferred cured mackerel with dill, cucumber and capers. The fish itself had good flavour but the balance of the pickling vinegar with the capers worked particularly well (easily 14/20).

Salted beef cheeks were slow cooked and had plenty of flavour, served with charred cabbage and a consommé of oxtail. This was a hearty winter dish, suitable on this cold, crisp January day. The cabbage went well with the meat, the oxtail adding some richness (14/20). Quail was served on the bone, stuffed with a little foie gras and smoked bacon and garnished with grapes, which provided balancing acidity (14/20). On the side cavolo nero with hazelnut pesto was a pleasant accompaniment (13/20), The kitchen showed it had its finger on the pulse with puy lentils served with chorizo and red pepper salsa (14/20).

The chef’s classical training showed up in a simple but carefully made lemon tart. The pastry was good and though for me a fraction more acidity in the filling would have been good, this was nonetheless a very capable dish (14/20). Coffee was decent.

Service was friendly, the bill coming to £68 a head with a bottle of wine to share, which is pretty much what you can expect to pay here on average.  The Ninth is not pushing any culinary boundaries but offers well-made and appealing food. It was full at this weekday lunch and it is easy to understand why.